You are here: Home / About JD Mackenroth 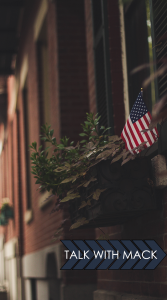 About Talk With Mack…

A blog about the conservative Christian’s view of things, and how I feel a patriot should behave…. There will also be car tips and and opinionated editorials on how a real man should act. I mean a man’s man, not some city boy with trendy beard. This is not a blog for snowflakes or liberals! So if this fits you, stop now! I openly support Donald Trump and his policies, consequently, you might get triggered! Don’t say you were not warned…..

Who is JD Mackenroth?

A conservative, freedom loving, God-fearing, patriot who supports the military and will fight tooth and nail for his faith, family, and freedoms. Here he goes – JD Mackenroth.

Born in America in the summer of ’82 to the son of a Marine and the daughter of a Coast Guard. He carried that sense of duty and instilled it in his son, who became a Marine himself. He was unable to join personally due to hearing difficulties he dealt with all his life; however, he sees that as a blessing because he would not have his beautiful wife and amazing son had he joined. God put him where he is for a reason, and he longs to be used by the Lord. He is a servant, a husband, a stepdad, a son, and a grandson. JD admires his grandfather, a Captain in the United States Marines, and a successful attorney.

JD sees himself as a sheepdog, watching over God’s flock, standing up for the innocent, and fighting injustice. He is a strong believer in the principle that evil wins when good men do nothing, that’s why he does not mind being the hero. JD loves his wife with everything he has, which is why he works two jobs, so she doesn’t have to work and commute long distances. He has two Bachelors degrees (Criminal Justice with a focus on forensic psychology and Business Management) and three Associates Degrees (Social Sciences, Liberal Arts, and General Ed).

JD is an excellent marksman with a bow and an avid second amendment supporter. He knows his way around a gun, and can shoot really well. He loves to hunt and fish, and wishes he had more time for both, but loves his family so wants them happy more than anything.